I’m a huge “Bachelor” fan, and proud of it. Yes, it’s trash TV, but it’s also romance, and competition, and conflict, and … oh, by the way, did you know that JUAN PABLO is going to be the next Bachelor?!?

I was about to explain what the “The Bachelor” can teach us about romance and love. Some might say it teaches us nothing, but those people are, perhaps, too fixated on “reality.” I would argue that it can teach us a great deal. For example:

You have to have a spark. Witness Shawntel, the funeral director from Brad’s season. And Ben’s season. (And yes, as the title of my book might suggest, I have a soft spot in my heart for funeral directors.) Shawntel was beautiful, smart, fun, adventurous—a total sweetheart. America loved her! But neither Brad nor Ben felt that special something that whispered, “This is the one!” Without that spark, you got nothin.’ Sad but true.

You can’t always trust your first impression. On Sean’s season, he gave Tierra the very first First Impression Rose. He loved her spark! Her spunk! Her spirit! Until Episode 7, when he finally realized she was psycho! On the other hand, Sean was a little freaked out by Lindsay, who showed up in a wedding dress and perhaps overdid it on the vino that first night. Yet, she turned out to be a real catch and made it to his final two.

Sometimes, love truly is blind (and perhaps deaf and dumb … emphasis on “dumb”). All of BachelorNation threw their collective stilettos at their TV sets when Ben picked Courtney. She was the woman we loved to hate, yet her model face, hair, and body, and her (however suspect) womanly charms had “Mr. Willing to Be Vulnerable” head over heels by the end of his season. Didn’t last. Saw that coming.

Sometimes it takes a break-up with Mr. Wrong before you can appreciate Mr. Right. (Alternate lesson: Sometimes Mr. Hard to Get is not actually a better catch than Mr. Right There in Front of You.) Fans know where I’m going with this one. Desiree was so blinded by her crush on Brooks that it wasn’t until he decided to leave the show that she realized her true feelings for Chris. Brooks was the aloof, unattainable one, while Chris was safe and steady. Sometimes safe and steady should win the race.

Talking about your kid ad nauseum might make you a great parent, but it makes you a boring “Bachelor” contestant—and yes, I’m looking at you, Emily. OK, so this isn’t really a lesson on romance, but I wanted to sneak that in here just in case Juan Pablo Googles his name and comes across this blog. Juan Pablo, I LOVE that you love your daughter but please, please, please don’t let the producers talk you into starting every episode with footage of her because that is just bad television.

And last but not least, everyone loves a fairytale ending. This is where you can’t let “reality” get in the way. We all know it doesn’t make the least bit of sense for someone to be in love with three different people right up until the last day of the show and then suddenly be certain of what he wants and ready to commit to her for the rest of his life. But this isn’t “reality.” This is “reality TV.” And that is exactly what happens, and what everyone wants to happen, and we all cheer when it does.

Though there may be a few of us out there who will have quite a different reaction if and when it happens for Juan Pablo.

I have a lot to say about this cover, but since you’ll no doubt scroll past all my brilliant prose in your rush to see it, let’s get that part out of the way. 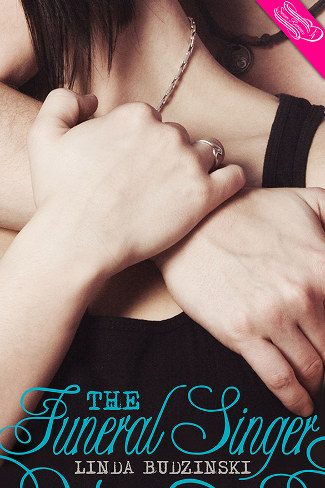 You can go back and stare again for a while if you want. Believe me, I’ve been staring all week. Because it’s gorgeous! And cool, and intriguing, and amazing, and omigosh, I can’t stop staring!

Anyway, here’s the thing about this cover: I get to take most of the credit for it.

As a rule, authors don’t have much say in their cover. Publishers hire designers to design them, and the author is stuck with whatever they get.

But not Swoon Romance. Swoon asks their authors for their vision for the cover. Pretty cool! So about six weeks ago, Swoon publisher Georgia McBride asked me how I envisioned THE FUNERAL SINGER’s cover.

My response: “I’d rather not say.”

See, I work in communications and marketing, so I deal with designers a fair amount. For pretty much every project I’ve ever worked on, my “vision” has been one thing, and the designer’s has turned out to be quite another. A much, much, much better ‘nother.

So, yeah, after five years of writing and revising THE FUNERAL SINGER, I had a few preconceptions about what its cover might look like. But I had a feeling a designer’s vision might be much, much, much better.

And I was right … this is nothing AT ALL like what I’d imagined. It’s brilliant!

So you see, if it weren’t for me keeping my mouth shut, we might have a totally different and no doubt much lamer cover. You’re welcome.

(OK, fine,  I’ll give Swoon a little credit, too. They rocked it. SERIOUSLY rocked it.)

Now that you’ve seen the cover, perhaps you’re wondering what this book is about. Well, you’re in luck! In addition to a cover, the book now has a publisher’s promo blurb:

Being a funeral singer was a dead-end job until it led her to him….

Seventeen-year-old Melanie Martin has witnessed her share of lame eulogies and uninspired epitaphs while singing part-time at her dad’s funeral home. She’s determined to be more than a funeral singer, more than someone’s “beloved wife” or “loving mother.”

When Mel’s impromptu rendition of “Amazing Grace” at a local rock star’s graveside service goes viral on YouTube, she becomes an Internet sensation, gains thousands of fans and followers, and snags a hot rock star boyfriend – Zed Logan, bass player for The Grime.

But instant fame isn’t easy – and neither is love. Especially when Mel realizes she’s falling for another guy – one who may just want her heart more than her voice.…

And that’s not all! In addition to a cover and a blurb, the book also now has a publication date: September 24! As in, less than two months away. So please, go mark your calendar and create a reminder for yourself on your phone and create an “appointment” in Outlook, because that is the day you will be able to download it. And then you can have your very own copy of this beautiful cover (and the rest of the book, too).